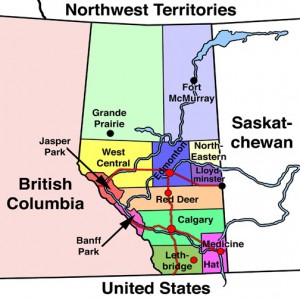 Alberta is a western Canadian prairie province and home of the Calgary Stampede. Rich in oil and gas resources.

The province of Alberta was named after Princess Louise Caroline Alberta, the fourth daughter of Queen Victoria and Alberta entered into the confederation on 1 September 1905.

Alberta  lies between the province of British Columbia on the west and Saskatchewan on the east, and between the Northwest Territories on the north and the state of Montana on the south.

There are a number of large cities in Alberta, these include:

Calgary, which seems to have the title for the most sunny days in Canada, also has extreme climate changes, has a interesting history and well worth the time investigating it rich cultural heritage.

Edmonton is the capital city and looks beautiful, never yet having had an opportunity visit.

This link will take you to additinal information on Alberta. You will  find information and resources about doing business in Alberta and immigrating to Alberta.