Edmonton is the capital city of the province of Alberta, Canada. Sometimes called Canada’s Gateway to the North, Edmonton is the farthest north of Canada’s large cities and has important road, rail and air transportation links. From its beginnings as a Hudson’s Bay Company fur trading fort, Edmonton has evolved into a city with a wide range of cultural, sporting and tourist attractions, and is the host of thirty established festivals each year. Most of Edmonton’s population works in the service and trade industries as well as in the municipal, provincial and federal governments.

Edmonton, Alberta is located on the North Saskatchewan River near the centre of the province of Alberta, Canada. 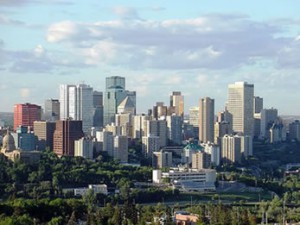